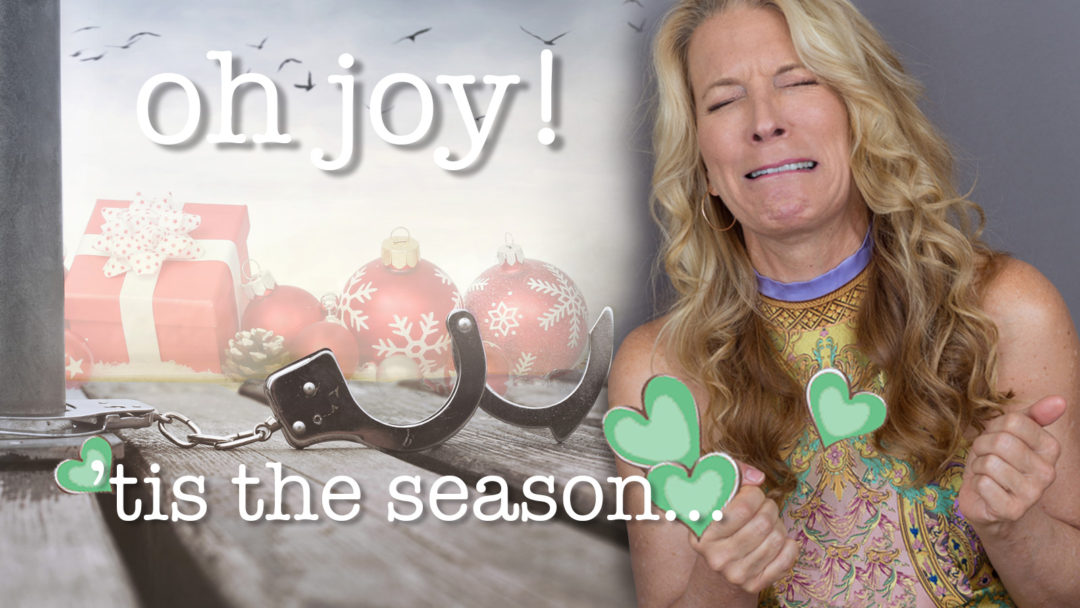 It’s that glorious time of year…the period during fall and winter when one handcuffs oneself to a romantic other for the season.

Yes, it’s a thing. You know what I’m talking about. And they’ve finally given it a name. It’s that twinkly, sweet-smelling, fairy-tale time of year that can be dreadful, cheesy and charged with desolation for single moms… hell, anyone single… but especially those of us with vaginas. Personally, I become a bitter-bitch. (The only Christmas balls I’d like to hang on my tree are those belonging to my ex’s loins—but alas, those have been removed by the new wife and rest securely in her purse.)

In short, I fucking hate being single during Cuffing Season.

The term isn’t new, but didn’t become part of the dating vernacular until recent years. Cuffing (“hunting”) season technically begins at Halloween, with prey generally captured and gutted by Thanksgiving, and firmly in place through the onslaught of Zale’s commercials at Valentine’s Day—insuring those cuffed are all tee-d up for the coveted Christmas/Hanukkah/Kwanzaa gift-giving ritual and New Year’s Eve kiss. (Fuckers!) It’s that most wonderful time of year when everyone seems to be in a relationship—except you. And the sense of being “uncuffed” at the holidays can be magnified for single moms—particularly those with exes who have moved on to much younger partners, generally blondes… often Russian.  #imnotbitter

In the spring and summer months, daters look for more casual encounters (aka summer flings). They take the wild, adventurous “What happens in Vegas stays in Vegas” vacation or the week at Club Med with the conveyor belt of sexual partners; whereas in cooler months, people are more likely to look for something more serious and committed (aka cuffing).

Although there is not much scientific evidence behind Cuffing Season, some believe there could be a biological component as cooler weather brings a natural and instinctive desire for warmth (aka canoodling). It may also be that cold weather-produced, prolonged indoor activity causes singles to become lonely, thus creating a desire to partner. After a summer of noncommittal hookups, daters (namely bachelors) are tired, so they actively search for someone with whom to watch Netflix and snuggle.

Or perhaps it’s just the holidays in general that unleash a greater desire for romance. (Thanks a lot Bing Crosby; The Bishop’s Wife; Love Actually; While You Were Sleeping; and When Harry Met Sally! Damn you, Meg Ryan. You’re a single mom. You should know better!) So what does Cuffing Season mean for a single mom?

We don’t have summer flings. We are moms. Our summer flings are with Frisbees flung at our kids. Our riotous summer adventures are at water parks. Our wild Club Med escapades are at the family resorts, generally populated by the nuclear sort; ergo with other people’s loud, noisy, screaming kids; ergo making you want to go nuclear.

Because if someone cuffs us, they cuff our offspring as well. And I don’t know that there is a “Chain Gang Season.”

So during this time of The Cuff, go about your business. Make your way through the fall and winter months as you do all others: with love and humor. Be thankful you can take off that bathing suit and put the cool-weather mom-jeans back on—because the mom-jeans are a lot more comfortable.

But don’t give up on dating. While your prospects might be smaller, if the occasion presents itself—go for it! You deserve the attention, the night out, the kid-free adult time with the opposite sex, even if cuffing clearly is not in the cards with that particular person. You may not get cuffed, but you might get a decent glass of wine… or better yet, you might get laid.

Don’t stress over it. Don’t read the blogs. Don’t go in jewelry stores. And for the love of God, don’t watch AMC because there is no need to suffer classic holiday love stories whilst making fudge and picking tinsel out of your kids’ hair.

Keep doing what you did last month and the month before, and enjoy the grown-up parties at school and work ’cuz you never know, there just may be a dad who you’ve never met, who has his own kids every other week, who might be into the whole chain-gang thing.

And if not, you have your kids. And that’s who the “holidays” are for in the first place. Lean into Cuffing Season knowing that with or without a date, you will have a super, merry, happy, jolly time.

And rest assured you will get the last laugh when all those kid-free merry, happy, jolly, “cuffed” couples are making-out on a beach with drunk strangers in just a few short months.